I used to think I was a change expert. I did it better than anyone….well, almost.  After all, I’ve moved so many times that I have to keep an excel spreadsheet of all the home addresses.  I’m losing count of how many moves I’ve made where I’ve unpacked boxes and had the house settled in three days flat, including all the pictures hung…..

This move has been entirely different.  Almost two months here in our new home and I still have moving boxes to open.  The “bonus room” in our new home is where I am now writing from.  My desk is neatly set up in a corner but I am still surrounded by boxes!  Stacks of little photos that used to have places in my old house are waiting to be placed…somewhere.  Each day I start with a resolve to finish the task of getting the boxes off the floor…I stare at them and sigh….maybe tomorrow.  I’m really not sure what is going on…why am I dragging my feet?  Could it be as simple as I’m slowing down?  Perhaps it is just accepting that there is no rush in getting these things done or maybe it’s just that the whole concept of change is getting much harder for me and my way of dealing with it is a something of denial.
Case in point; getting Alabama license plates (errr…I mean plate. There is only one plate, for the rear of the car).  The law states one must have register their car and tag with an Alabama plate within 30 days of moving to the state.  I cannot believe that I’ve already lived here three months!  It’s been like a little shadow over my head for some weeks now; I new that I had better get into compliance with the law before something unpleasant (like a pullover by the Alabama police) occurred.  I was also dragging my feet on this task because the “trauma” of getting my drivers license was still fresh in my mind.  I didn’t want to lose nearly a half day again for such a mundane reason…after all, time IS valuable even when one has nothing else to do!  I was assured by several folks  that the process of registering the car was much easier.  “HA,” I thought….I’ll believe that one when I see it.

So, I set out to find the car registration place to (in Alabama speak)….”get ‘er done.”  I looked up the address online, finding the closest place to my house.  True to form since moving to Huntsville, my car (from here on out “Goldie”) had trouble finding the place.  We may as well have fallen into a big black hole according to Goldie since moving to Alabama.  Her navigation abilities have been nothing short of abysmal.  I’m constantly screaming at her, poor dear, admonishing her for her poor directions.  It’s a mystery why  she cannot find a place that has been–according to the locals–on the map for years.  Me thinks Goldie would rather be back at the ocean!  Apparently, this change has been as hard for her as for her driver!  But I digress….

Eventually Goldie got me to the vicinity of the address I had punched in.  In her Australian voice she purrs…”you have arrived at your destination.”  “Really?” I say out aloud as I squint through my sun-readers.  All I see is a grocery store, Star Market.  Hmmm.  “Well Goldie, looks like this has been another boondoggle,” I say.   It’s just not in the cards to get my Alabama license plate today.  So, I decide to park the car in the grocery store lot and check out the store since I hadn’t been in it before.

I go inside and start walking through the isles.   I’m still scratching my head over why Goldie thinks I had “arrived.”  Yes, the address on the door of the supermarket was one and the same as what was listed online.  Perhaps the car tag business had moved since that online posting.  Hmmm.  I keep checking out the isles, turning the corner to the Meat counter and what do I see?  Well, meat wasn’t it.  There in a large area were two cars are parked show-room-style… 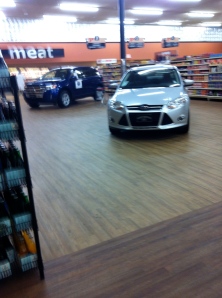 Did I mention I was in a supermarket?

Not sure what the promotion is about….but I am wondering where the beef is….

Well, this is all just about as exciting as watching water boil–this supermarket isn’t exceptional… I think its time to go home and watch a Netflix movie.  As I was heading out of the supermarket my eye catches a line of people queued up behind a large plate-glass window.  Hmmm…..
Mind you, there is no sign on the door or window to indicate what this room is for.  But, yes indeed, it is the car tag/title/registration place!  Cracks me up.  If I had blinked I would have missed it.

I walk out with a plate in hand less than ten minutes later, feeling rather good that I have checked-off this nagging item from my to-do list.  I admit to myself that the locals were right…this was much easier than getting a drivers license. 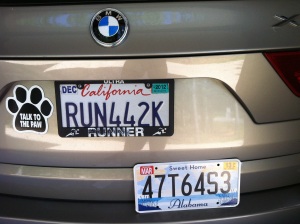 Now, if I can only muster up the enthusiasm to actually remove my beautiful vanity California plate from Goldie and attach the Alabama plate.

As of this morning….the Alabama plate is still lying (face down) on the front seat of Goldie.   Change is hard.