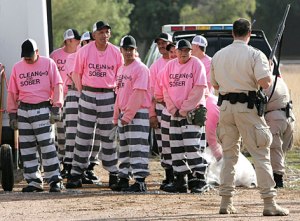 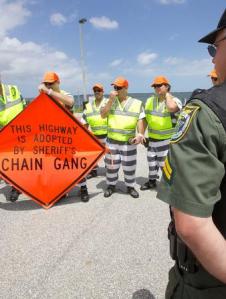 You know that old adage….the one about opinions which goes something like this: “Opinions are like assess, everyone’s got one.”

I’m throwing my opinion into the ring about a story I heard on the news just the other day.  It was a news piece about the re-emergence of prison-system chain gangs in different parts of the country, including in Brevard county Florida.  Inmates wearing black and white striped uniforms, black boots and shackled around the ankles with chains are sent outdoors to perform various public service projects (i.e. picking up trash on the roadways, clearing weeds and mowing green ways).   The sheriff in Brevard county, Wayne Ivey, wants to send an anti-crime message and launching the chain gang project, in his opinion, is a clear and glaringly visible statement to that end.

It got me thinking about something I saw in Phoenix, Arizona about seven years ago when I was visiting there to help my mother during one of her health episodes.  I was in the car with my step-father on the way to the hospital when I saw a group of men in black and white striped prison garb picking up trash on the side of the road.  I’d never seen such a sight; It was like a scene out of an old Hollywood movie.  I’ll have to confess that I laughed at the scene because I honestly thought it was either some kind of publicity stunt or a movie in the making.   I asked my step-father about it as we drove by the group of ten or so men.  “That’s the work of Arpaio,” was all he said.  He didn’t have to say more.  That would be the very controversial sheriff of Maricopa County, Joe Arpaio. He’s known nation-wide, considered to be an extremely tough law and order advocate who routinely pisses-off civil liberties activists.  Law and order IS the law of his land and the incarcerated (to include women and juveniles) aren’t given an iota of “spa” treatment under his watch.

Naturally, civil rights activists aren’t so happy with the resurgence of chain gangs and honestly, at first blush, its easy to understand why.  The history of the chain gang system isn’t too pretty.  Not only does it evoke images of slavery but also the reality of severely cruel, harsh, and often inhumane treatment of prisoners chained together while performing forced hard labor.

Sheriff Ivey of Brevard County was quick to outline the details of the program and you’d be surprised, as I was, to find that prisoners are practically knocking down the prison gates to be considered for a spot on the chain gang.  You see, these chain gangs are not like the ones from sixty some years ago.  Inmates are not forced into this labor assignment; they volunteer to be on the chain gang (or, what some prison/department of corrections systems prefer to call work details or tandem work crews).  Inmates selected are not deemed a danger to the community; their criminal history isn’t violent nor extensive and they are demonstrating good behavior during their incarceration.  In addition, inmates are not chained to one another.  And why would, as in Sheriff Ivey’s county, thirty-five inmates volunteer for the coveted eight spots on the chain gang?  They want to be outdoors even if it means weeding, clearing brush, or picking up trash in the hot sun.  One inmate who was interviewed said it was a chance to be outside, smell fresh air and get a glimpse of life outside the prison walls. 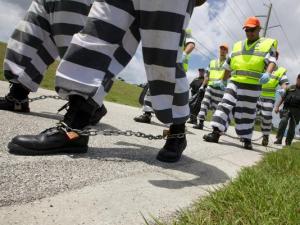 I’d be “Scared Straight” just looking at the chains!

As opposed to the archaic, inhumane system of long ago, chain gang inmates today only work a short amount of time outdoors.  There are also work details that work in animals shelters training dogs, those that refurbish bicycles and those that provide the landscaping services on and around prison grounds.  In Arizona’s Maricopa county there are even chain gangs that perform burials of indigent people who have died as a result of alcohol abuse.   It’s sort of a win-win scenario; the work details save taxpayers money–providing an estimated $10 million worth of labor in Florida by the sheriff department’s estimates–because inmates do manual labor that the county otherwise would have to pay others to do.  While I am sure that some local governments might balk at the loss of low-wage jobs for the law-abiding it would seem that any program promoting anti-crime would be better for its citizens in the long run.  Seeing those prison-striped inmates on the roads picking up trash fuels (or should) the “this could be you if you screw up and break the law” message.

Sheriff Ivey in Florida says, “I remember growing up as a small kid, looking out the window of our home at members of the chain gang working in a ditch and thinking to myself: That’s not a place I would ever want to be,” I’ve said from the very beginning that I’m going to put emphasis on crime prevention, and this is a component of that. Not wanting to go to jail is a form of crime prevention.”

Most states had outlawed chain gangs years ago but Alabama was the first state to bring it back in 1995.  I know what you’re thinking!  Now that I live in “middle earth” I am becoming “one of them.”  I assure you that I am not falling down the rabbit hole here but I do think there is a case for more of these “modern” volunteer work details (and yes, perhaps call them something other than chain gangs).  Every state should have prison-striped inmates working outdoors in full view of the public.  In my humble opinion, It is the most visible version of a “scared straight” program out there.  And, for those that condemned Maricopa County Sheriff Joe Arpaio’s mandatory wearing of pink underwear and pink work detail shirts for male inmates convicted of DUI’s, if that doesn’t scare a guy straight out of a life of crime I don’t know what would.

One thought on “Pretty in Pink”