When we moved to “middle earth” we intended on renting initially.  I’m pretty sure my hubby was nervous about buying particularly since he nearly had to drag me by the hair to get me to move here.  Anyhow, it became apparent in just a day of pounding the pavement in search of a decent abode that renting would not be an option.  There just weren’t many homes to rent and the ones that were for rent certainly didn’t meet our standards.

Our house is enormous compared to the townhouse we lived in, in Southern California.  There we “squeezed” into 2,500 square feet.  Well, that’s what it felt like anyway (I know…that’s a mansion to some) after living in a single family, two-story, home with a large basement in Northern Virginia.  Somehow with the layout of the townhouse we didn’t have room for certain furniture.  I actually gave an entire bedroom suite to one of the moving men.  He didn’t even have to unload it from the moving van.   He was a young kid, married –didn’t look older than eighteen–with a child on the way.  “Take it…its yours,” I had said.  “We just don’t have the room for it.”  And, while that was definitely true since we were down one bedroom and an entire basement from our Virginia home,  I’ll confess that I loathed that colonial style furniture, vestiges from a previous chapter in my hubby’s life.  This was the perfect opportunity to pass it on!  The young man was most appreciative and that made my heart glad.

So, here…we enjoy 5,100 square feet.  I know. It’s crazy!  There’s just the two of us and the furniture we have looks like doll-house furniture in this house.  We have one room with practically nothing in it (currently, I use it for storage).  Maybe someday, if we stay here long enough I’ll figure out what to do with that room.

“We do not need this much house,” I told my husband last year during our second walk-through with the real estate agent.    And every day when I have to clean it I am reminded of that statement!  Hubby’s answer to me then was “I know…but it’s the floor plan we like and it’s so quiet up here.”

My mamma was spitting bullets I hear tell; she thought we were nuts to have bought such a large house.  Yes mamma, you’re right.  But guess what?  We have this big house for now…because we can!  This is not a forever deal.  We’re enjoying the moment, as it were.  Who knows where we will end up next and what we will have?  I’m almost 99.9% confident that our next home will be small again…and, eventually we may even be in some assisted living facility….and then we’ll be in an urn of some sort before our ashes are cast out into the sea….or wherever…. 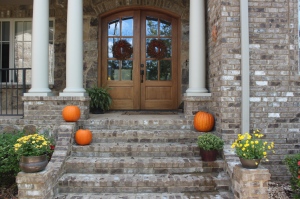 So, perhaps you can be happy for us?

It’s mighty quiet up here, a complete turnaround from the wall to wall concrete jungle where we used to live in Southern California.  Now that it’s getting cooler it is almost eerily silent without the constant drone of frogs, cicadas or crickets.  I’m glad these critters are quiet now.  Some people find them comforting or charming.  Me…not so much!    Our home is situated on the top of a mountain, specifically Little Mountain.  When we moved into this three year-old home at the end of July 2012, there were only five homes on Little Mountain and about 40 lots for sale.  We thought that all these lots were never going to move.  Most of them had sat unsold for well over five years.  There is also a lot of rock up here (big rock) and although it adds to the beauty of the landscape it makes it difficult to plant anything).  Also, we’re smack dab in the middle of a forest of sorts.  Lots and lots of mountain oak, mountain ash trees, river birch, weeds large and small, etc.  Clearing lots with all the rocks and trees adds to the expense of buying these lots so we thought it would be years before more were sold.

In the last six months eight homes have sprung up on Little Mountain.  In addition, two more lots are in the process of being cleared.  Naturally, this new construction has caused a considerable amount of noise (breaking up the big rocks has caused my house to quiver and shake and has proved might upsetting to the poodle!).  Add to that all the congestion on Little Mountain with all the construction trucks, not to mention loads and loads of trash, construction debris, and many flat tires (at this writing we have managed to escape being nailed.  I’d like to think it’s because of my diligence in picking up nail after nail during my daily walks with the poodle.).

The encroachment of more homes is a mixed bag for me.  On the one hand it is comforting to know that there are a few more souls living on Little Mountain.  I’m a city gal at heart.  I’m used to living close to the pulse of bright lights and shopping malls not to mention Starbucks at every mile post.  Sometimes I feel mighty isolated up here, especially at night when hubby is away on business travel.  Taking my poodle out for a walk in the pitch dark takes all the nerve I can muster some nights.  We do have a lot of critters up here.  There’s the skunk or two that has sprayed the neighbors dogs not once, but three times.  There are a couple of turkeys roaming around, hawks and owls, tons of menacing squirrels who take delight in taunting the poodle, chipmunks, bats, slithering snakes, and dreaded armadillos.  Those damned armadillos are almost as bad at tearing up the mountain as the construction machinery!    There are deer, possums, badgers, and even a couple of foxes.  And, don’t get me started on the plethora of super-sized creepy-crawlies. People are mighty plump in Alabama and the bugs are no exception!

What pains me is what’s happening to the deer population.  Mind you, there aren’t that many deer….perhaps eight to ten including several fawns this year.  It is clear that they are in certain peril of loosing their homeland.  Yes…. several homeowners have complained of flowers being eaten and gardens ruined, but still….for the most part its lovely to catch glimpses of these creatures during my early morning walks or late in the afternoon when walking the poodle.  They are rapidly being pushed down the mountain, into neighborhoods with lots of houses and little protection, and eventually out, onto the highway.  My heart aches for them; they have nowhere to go.

And though we are still considered rural, we are fast becoming part of the urban sprawl with more homes on the mountain,  the new Walgreen’s set to open next week down the mountain, and there’s breaking ground for yet another store yet to be named.  I’m still a city gal at heart but it is a mixed bag watching everything around me change so dramatically in just the course of a year.

Finding the bliss in all this change is challenging…

It’s all part of the journey and fighting it makes no sense whatsoever.  I’m not going to be here forever…there is bliss in that.  🙂