Lord have mercy.  It’s already November 4th.  Where in the world has the time gone?

Christmas is now literally weeks away and I am, as usual, behind.  Makes no sense mind you.  I don’t have a job and I don’t have little ones to chase after.  In this moment I think of my sis who is like a little bumble bee at times; she’s buzzing around getting ten things done at once and manages to do them well and look like a Botticelli dream (The Birth of Venus comes to mind)  in the process. 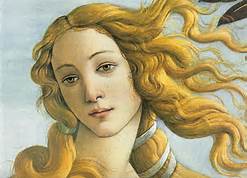 Botticelli’s Venus….My sister’s skin is even prettier however….

One would think I have plenty of time to get things done on the “to-do” list.  And I do.  What’s my excuse?  It seems that I have a mighty bad case of Procrastination.  I think this should be included in the World Health Organization’s list of infectious diseases. I had to have caught this procrastination disease from someone, right?!  I used to be fairly good at being organized and on top of the “to-do” list…not great to be sure, but good enough.  Something happened after I quit working full-time I think.  Unfortunately, I’m also prone to chastising my poor husband for the same affliction…stepping over the line once in a while in frustration saying that his middle initial “P” stands for procrastinate.   I guess this is a case of the pot calling the kettle black.  I’m just as guilty as he, if not more so, because he’s got the work card to play and I don’t.

Yep…I’m guilty of all three!

Hmm.  Did I get this “disease” from him?  After all, we’ve been together for fifteen years.   Note to self:  Do NOT bring up said subject with him unless of course we are in a deliriously happy moment of cycling together or some such thing.

I’m not sure why I put things off.  I’ll admit to being lazy sometimes.  I heard somewhere that it is a Libran trait.  Horoscope aside, maybe I’m just overwhelmed with too many “videos” playing at once in my head so that I cannot focus on  any one thing.  These videos keep me awake at night.  There’s a good excuse…sleep deprivation!  Wanting things to be just right is also another reason I put things off.  It’s called perfectionism and I know it has paralyzed me often.   I reason that I am simply waiting for the right time or the right thing.  I think about the “Things To Do” list every day….then I sigh and go back to reading…or how about I watch a show on Netflix?  Or let’s take a nap to make up for lost sleep…or…I must take the poodle out for his walk now!

well…you know where this is going….

So, clearly I’ve got to shake the cobwebs from my brain and get busy… however…. a visit to my mother looms; it’s just days away.   I’m already feeling a severe energy drain and I haven’t even boarded the plane yet. I’m perilously close to falling into a negative pattern so I’ve got to slap myself silly, metaphorically speaking of course, and get myself out of  this pre-holiday funk.

I’ve not been able to practice yoga via my online yoga membership because of internet problems for weeks now.  Calming the waves of the mind through a consistent yoga practice has been elusive for weeks.  This could be contributing to this whole negative energy thing and the procrastination issue.   Every time I pull up a class and try to settle in on the mat the streaming video re-buffers every minute or so.  Yesterday, frustration really got the best of me when attempting to participate in an online class… a stream of expletives came flying out of my mouth and I nearly threw a yoga block out the window.  Not very yoga-like!  Of course, after the short eruption, I beat myself up;  I should be able to practice yoga on my own!   I miss my yoga practice in Southern California.  I feel lost without it just like I did when my running mentor transferred to a new duty station all those years ago.  For a couple of weeks I simply couldn’t run;  how could I, without the woman who’d been my running partner, friend, and confident for almost three years?!  Somehow I managed to flip some switch in my thinking pattern and I got off the couch and out the door.

That’s what I need today.  A flip of the switch.

Or a kick in the tush.

OK….Out the door I go into the crisp, sunlit morning.  That’s a start.