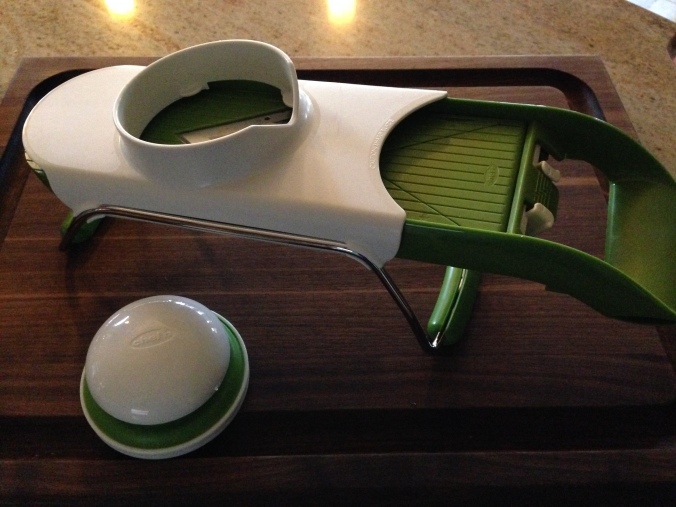 Before I continue with the rest of this post, let me state that my lovely and talented sis is not at fault for the events that follow. No way, truly.  There. Stated.

My sister raved some weeks ago about a sweet potato recipe in a new cookbook she had recently purchased.  She continued to rave about a handful of other recipes she, along with her Master Mincer husband would prepare from this cookbook.  She’d describe, in mouth-watering detail for example, the heavenly sweet potato Au gratin dish with fresh sage, six gloves of garlic, and cream.  Oh, Yum…..

After a couple of weeks of listening to her cooking (and eating) pleasures I’d had enough.  “Basta (enough),” I said to myself one morning.  I’m going to deal with this situation head on.

I went straight to the computer and pulled up Amazon.com

In two clicks, I had purchased the cookbook and less than 48-hours later I was salivating over the photos at my kitchen table.

Ottolenghi (http://www.ottolenghi.co.uk/) by Yotam Ottolenghi and his partner in life and in business, Sami Tamimi, is a beautiful cookbook full of interesting, unique and healthy recipes. Just on the photo alone I decided to include the sweet potato recipe in my Christmas dinner meal.  I breathed a sigh of relief to see that it was easy to prepare as well.

I called to tell my sis that I’d purchased the cookbook.  “I am excited to try some of these recipes” I say adding that I’ll be making the sweet potato dish for Christmas.

“Oh, you’re going to just love it,” is her enthusiastic reply.  She also says that I will need a mandoline slicer to cut the potatoes just right.  “I didn’t have one so I got an inexpensive one at Target,” she says.  Hmm.  I don’t have one either.  Not to worry, I’ll head over to the store this weekend and get one.

Later in the week I happened to drag Rocket-man out for some Christmas shopping.  We stopped into Williams-Sonoma (yes…there is one store in Huntsville!).

“Let’s check out the mandoline slicers,” I say remembering that I was intent on serving the sweet potato recipe for Christmas.  I saw several mandoline slicers on the shelf (one was $120, another $99).  Yikes!   I didn’t realize these were so expensive. Luckily, we found one for $49.  I walked out of Williams-Sonoma with my new purchase…along with a tin of Christmas dark chocolate peppermint-bark, eager to get home and try both.

I had zucchini in the fridge, along with fresh Italian parsley so I decided to make my farfalla pasta and zucchini recipe.  A breeze to put together with good olive oil, fresh chopped garlic, fresh italian parsley, some red pepper flakes to add zing, and freshly grated Parmesan cheese to top it off.

I took the mandoline out of its packaging, read through the instructions, then cleaned and rinsed it thoroughly.  Pretty straight forward instructions and safety instructions… in bold letters.  ALWAYS USE THE HAND GUARD.

Yeah, yeah.  Duh….of course! I think to myself.

It’s already dark outside and Rocket-man has finally pulled himself away from work at his computer.  He pours me a glass of red wine and starts talking about his day as I wash and dry the zucchini in preparation for slicing.

I put half a zucchini onto the slicer and place the hand guard on top of the zucchini to hold it in place.  I pull back and forth on the slicer handle several times and voilà…there drops several perfectly thin slices of zucchini.

“Wow! This is nice,” I say.  “Look how wonderfully thin these slices are?”  I start to continue the process.

Folks, I am not sure what happened next.

All I know is that in the blink of an eye there was blood everywhere!  I had sliced two fingers on my left hand.  “OUCH,” I yelled….followed by a flood of expletives, along with plenty of  “Oh-my-God-Oh-my-God-Oh-my-God’s” mixed in for good measure.

By the time Rocket-man got to me, I’m at the sink, hopping up and down and writhing this way and that in a fear and pain-driven dance, flooding the wounds with cold water in an attempt to stop the bleeding.  I couldn’t stop cursing at myself either and, looking back, I was ever so thankful that Rocket-man didn’t point out the obvious at that moment: Didn’t you use the hand guard?  Honestly, I thought I had;  I must have literally blinked, removing it for a nano-second and that was all it took.

The cuts to both fingers were mighty deep and the bleeding would not stop with any amount of pressure, cold water, or elevation.  After a good ten minutes it was clear that we had to seek help.

Now, there is an urgent care facility just five minutes away from our house.  It is meant to provide medical treatment service for non-threatening medical issues (colds, flu, and hopefully, mandolin-sliced fingers!).  The locals here call urgent care centers “Doc-in-a-Box.”  This of course does nothing to reassure me that I’ll receive an acceptable level of care but the wait time is supposed to be much more desirable than the hospital emergency room, possibly waiting six hours to be seen by a doctor.

It is pouring rain outside as we hop in the car and make the short trip to the urgent care center.  My fingers are wrapped in a towel, already blood-soaked again after a third towel-changing attempt to stop the bleeding.  We walk into the urgent care facility and are thrilled to see that the waiting area is empty…yes…empty!   We learn there are only two other people in the treatment center receiving care.  I step up to the reception window, and raising my injured hand, say that I’ve cut two fingers in a kitchen incident and I cannot stop the bleeding.

The receptionist says (and I quote): “Oh.  I will see if the doctor is comfortable seeing you.”

I’ll confess folks….I was not very nice.  In my defense, I am standing there bleeding and I don’t know if I’ve sliced the tips off completely because I was too chicken to look.  All I know was that it hurt like hell and there was A LOT OF BLOOD.

“Excuse me?” I all but yell.  You need to see if the doctor is COMFORTABLE with my problem?  What kind of doctor is he?   Rocket-man steps up to the plate, so to speak.  He pulls me back from the reception window ever so gently as says maybe I should be nicer.  “Let’s not piss anyone off especially since you will probably get a shot of some sort, don’t you think?

OK…another confession.  I was ready to smack my husband!  After all, He was not the one standing there bleeding like nobody’s business and wondering if he had sliced off two of his fingers.  I am supposed to be nice, AND feel that I am in good hands (too funny…I’m cracking myself up here) when someone suggests THE doctor might not be comfortable?

Nod your heads in agreement with me folks…pretty please.

A physician assistant that looked like he was still in high school ushered us to a treatment room and began asking the standard questions.  Within minutes the “Doc-in-a-Box” doctor was introducing himself to us and inspecting my wounds.  He seemed competent enough and he wasn’t 90 years old which is what I was expecting after reports from area locals.  He could see that I was just a tad this side of edgy and attempted to bring levity into the situation by cracking jokes.  Rocket-man was happy and even talked football.  ME? Not amused.  Anyhow, the doctor said he’d be able to fix me right up allowing me to relax just a little.

Turns out I didn’t need sutures.  He literally super-glued by wounded fingers after determining that the tips were still mostly intact!   He wrapped my fingers in plenty of gauze and tape and an hour later I was home.  I wanted to take something for the pain but Rocket-man cautioned against it saying ibuprofen would interfere with coagulation and maybe I needed to give the wounds a chance to really clot.  Still mighty cranky I shot back, “You’re a PhD. physicist not an M.D.”  He took my crankiness in stride and set my glass of wine in front of me.  OK….maybe you’re right…this time, I whisper. 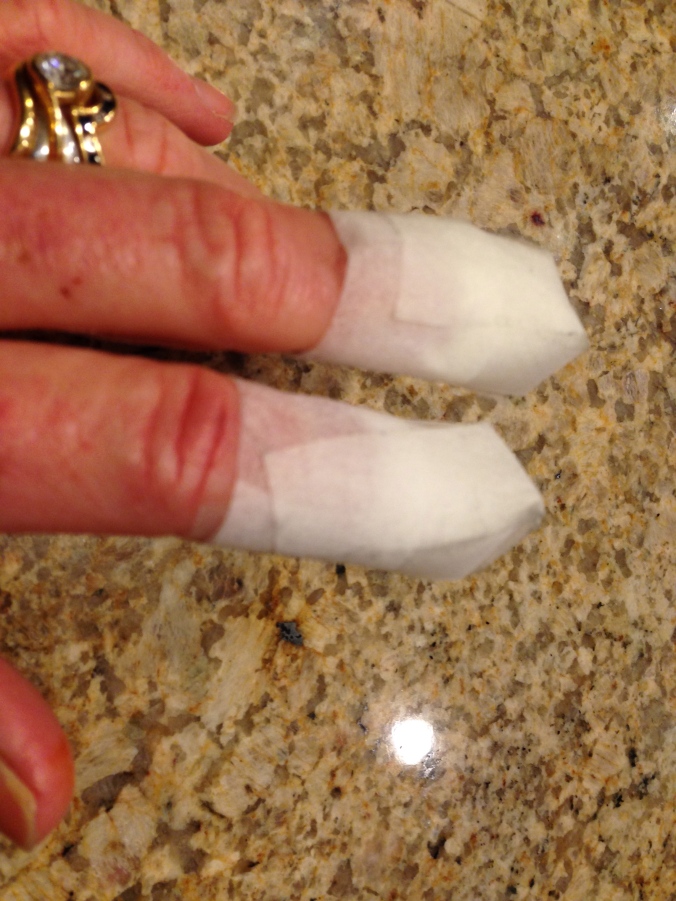 How can I make Tortellini with bandaged fingers?

The evil green machine of course was still on the counter.  Undeterred by the traumatic events of the evening, Rocket-man cleaned up the machine and continued the process of slicing the zucchini without further incident.

It was indeed challenging trying to get the dinner put together with one hand.  My hand was throbbing and my pride bruised but the silver lining in all this?

I didn’t have to do the dishes! Thank you Rocket-man.

Tomorrow comes the real challenge.  Will I be able to make homemade tortellini for my daughter who’ll visit “middle earth” for the first time with two bandaged fingers?