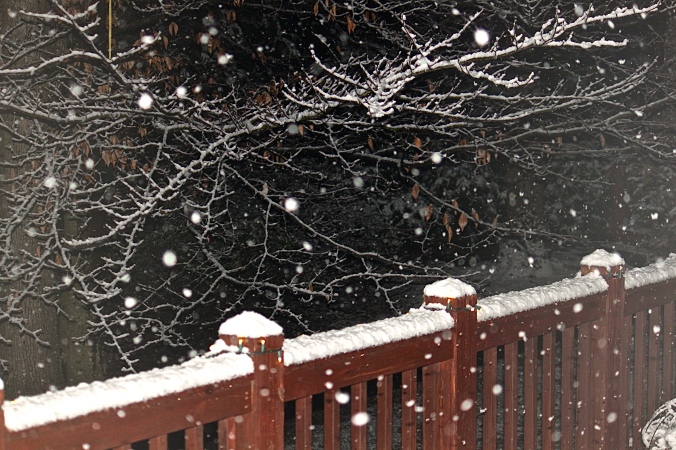 It’s a New Year.  We’re six days into it and I’ve yet to muster up a change to old habits.  I’ve got one or two annoying habits that I’d like to get rid of, if not tweak into submission and already I’m off to an abysmal start.   I’m blaming it on the frigid temperatures.  A polar blast has gripped “middle earth” and much of the country with it.  It’s currently 13 degrees here on Little Mountain with wind chills bringing it to three degrees below zero.  It’s expected to dip down even further this evening, to six degrees!  I’ve haven’t been able to warm up since backing out of my sister’s driveway in Northern Virginia four days ago.  It had snowed the night before and a winter wonderland awaited us in the morning for our drive home, back to “middle earth.”  After years of living in the “season-less” Beach Cities of Southern California it was a delight to see snow.  White and wonderful….I wanted to run outside in the dark of the night to make a snow angel…but I thought better of it as it was freakishly cold!

Sadly, our lovely brief holiday stay with sister and family had to come to an end (as happens with all good things).  Sis was fighting an upper respiratory infection during our stay and my heart ached for her.  Still we all managed to have fun and our new year’s day celebration with friends was so very delightful.  Simply put, no matter what,  I love being with my sis and her family.  Wonderfully delicious food, perfect pomegranate martinis and plenty of hugs and giggles with Alexandre-the Greatest.   Alas, after a mere four days of Northern Virginia family togetherness we had to forge homeward even if it meant travel through bad weather.  Fortunately the roads weren’t too bad; in less than two hours we were out of the snow and icy road conditions but the freezing temperatures (made all the worse due to humidity and high winds) followed us for the entire eleven-hour drive home.  I’m still COLD!  Even as I type these words I’m bundled up with a blue cashmere scarf around my neck and fingerless gloves to warm my perennially cold hands.

Seems that some insects are actually “freeze tolerant” surviving the formation of ice crystals in their horrid little bodies by producing proteins that control the freezing process.  Worse yet there are insects that are “freeze avoidant.”  They accumulate anti-freeze in their cells before winter.  In addition, it isn’t winter that has as much an effect on bug life as much as spring.  An early mild spring followed by a cold snap can help or hurt the process of insects emerging from their environments after winter in search of food and colonization.  We might even see unusually large insect populations come spring time.  Oh God…anything but those awful camel crickets on steroids!

I give up.  I need a cookie to soothe my insect-fearing troubled soul.

Oh wait.  In an effort to start the new year eating better I threw out the last plate of Christmas cookies…the one that the next door neighbor baked for me…the one filled with fudge and chocolate and sugar-sprinkled goodness.  Damn!

I think I’ll dive back into the safety of my king-size bed… under my warm and welcoming down comforter and dream of my insect-free days while living in Southern California.