Yes…that was part of my intent when I decided to start a blog as evidenced in the name of this here locale on the World Wide Web.  It’s not been easy, I’ll admit. I’ve had a tendency through most of my life to see the glass as half-empty….viewing most of life, myself included, with a fair amount of distrust and negativity.  So when I moved to “middle-earth” and felt myself falling into an exceedingly dark abyss of negativity as a result of being dragged by Rocket-man from my ocean bliss to insect and humidity hell, I knew I had but two choices….(and no, it wasn’t necessarily to start throughly loving my new “sweet home”).  Be open to the new chapter or slam the door shut on life. I needed to force myself to start seeing the world through rosier colored glasses. I needed to force myself, if only for one moment at a time, to get out of my head and into my heart where I knew deep down, there just had to be something better than the cynicism, resentment, sadness and overall mistrust I was carrying around. That suitcase was getting mighty cumbersome to drag and I was tired of it all.

Perhaps writing something down would help?  I’d tried that many years before but my ex-husband had found my journal and naturally wasn’t happy with my words. I’d tried my best to explain that, in an effort to get through the mess that tore at my heart, I was just pouring stuff out on to paper. I also explained that often after such a dump…minutes, days or weeks later….I would look back on those very words and realize that most of it was nonsense of the heart …thoughts and feelings that came spewing out of me in a moment of complete frustration…or even, as sometimes happened, joy! Anyhow….my ex has been a thing of the past (nearly 17 years a thing of the past). There isn’t a day that goes by that I don’t pinch myself over my Rocket-man; I’m ever-so-fortunate that Rocket-man is a guy who is thoroughly comfortable in his own skin. He’s the one who encouraged me to write whatever comes into my head….and so with that I began once again to journal….putting words down (though this time they fly into “the cloud”) with hopes that this practice helps me navigate through the new, healthier, chapter I wanted to set for myself.

I think, in my humbe opinion that is, it’s working. These past six weeks have forced me to take one breath at a time. There’s not been a day that has passed that hasn’t brought a challenge of seemingly monumental proportions. Things haven’t necessarily gotten better in the mother department. But one thing is for certain, I’m weathering it much better than I ever anticipated and I’m sure it’s because I’ve made the conscious decision to NOT (God love her) be like her and to be positive. It sounds like such a cliche, I know, but there it is. With each episode of negativity, meanness and manipulation, I am doing everything within my power to fight from falling into the same old patterns. I’m putting words to paper….I’m taking long, deep, slow breaths….I’m repeating sweet little mantras in my head….whatever it takes. I remind myself that Mom has been this way much of her life and though I’ve been carried down the rabbit hole so many times before it’s HISTORY and it won’t happen again because I have the power to not let it happen. Some stuff I have LET GO….some stuff I haven’t but I’m working on it and I’m finding humor in it all. Another cliche…”Laughter IS the best medicine!”

So….each day I’m throwing myself out to the universe–the Carefree universe. I’ve made it my mission to talk to someone new each day and share something…anything…just so that I make a connection for myself and for someone else. Most of these folks I’ll likely never see again but it matters not. I’m sailing through this difficult time with grace and I’m learning along the way. It could have been so much worse but….another cliche folks….”Attitude IS everything.”

So….while dropping off boxes to ship at the UPS store, I shared my Tarantula Hawk photo on my iPhone with three folks. We chatted for minutes about my find and shared laughs as well as oohs and aahs. I talked about my beautiful sis and her family and how I love the desert and the spectacular sunsets. And what fun I had meeting the young gal that I brought in to do the touch up paint work on all the areas where the roof leaked. It was a pleasure to chat with her while she did her work. I learned she had studied to be a nurse and was a year shy of graduation when she wanted to run off and explore the world. I learned she was a white-water raft guide on the Colorado River and she worked at the Kona Brewing Company in Hawaii as a brew-master. “Oh man,” I tell her….”My husband will go nuts that I met you…Kona’s Pipeline Porter is his favorite!” We also shared fits of laughter and fist pumps over getting a Cuisanart food processor to work.

I could go on.

Everyday I am finding bliss among the sadness and drama and with it I am finding that it is easier to smile more and complain less. Certainly the Carefree sunsets are helping me along the way…. 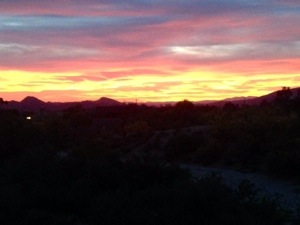