The sun has finally returned from it’s vacation of sorts after days of dreary and at times, very dramatic weather. After a thick blanket of fog in the early morning it is now quite lovely out.  Despite the fog, I enjoyed a five-mile power walk early this morning with The Poodle, even stopping to take some photos along the way.  I lingered for a few moments longer than usual on a bridge over the Flint river, inspecting a spider’s large web. I marveled at the strength of it and how it could survive the big storm just a few days before.

Oh what a beautiful web!

Yes….Just a few days ago was a whole different weather scenario. We had tornado sirens blaring away. Nothing like hearing tornado sirens to get one’s heart rate up and mine was beating out of my chest with anxiety.  I hadn’t been in the gym for twenty minutes before I heard people chattering about the approaching storm.

I could see that the sky was beginning to turn an ominous gray. I had no idea we were supposed to have bad weather. Usually, I get weather alerts on my smart phone. I never had to deal with weather alerts while living in Southern California. There is virtually no effective early warning system for earthquakes (only seconds to less than a few minutes is not my idea of early warning) and it rarely rains buckets in Southern California (in fact, this year Californians are suffering through a record drought). Somehow during the ridiculous two-day process of updating my iPhone to IOS8 (yep you read that correctly….two days….that’s how S-L-O-W our internet is here on Little Mountain) I lost some of my Apps, the Clear Day weather App being one of them. My mother, in her continuing care community, enjoys high-speed internet but here on Little Mountain… in middle earth… my husband and I often cannot even be on the computer at the same time.  Sigh.  Anyhow, I now conclude that I have a dumb phone, an issue I’ll have to address when I get home.  Weather alerts are crucial to life here in middle earth.

The gym was packed when I had walked in but now people were starting to leave, en masse.  Black clouds swirled through the sky. Honestly, for just a moment it was as if Death Eaters were approaching! So much for a gym workout I thought as I cursed my dumb phone; I’d have never left the house if I had known tornado weather was approaching. Now it was time to bolt for the car. 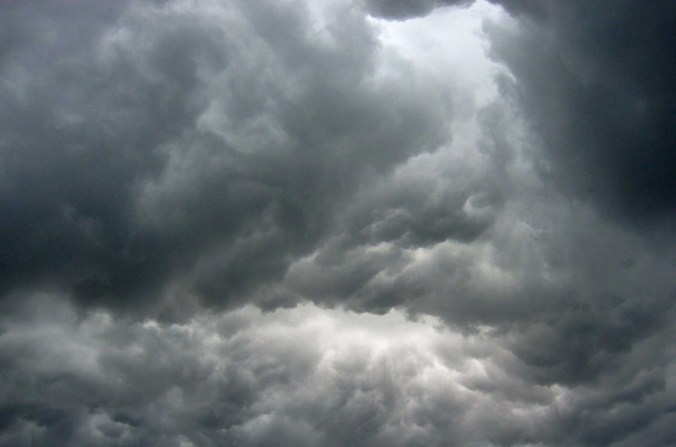 A Death Eater is surely going to pop out of this ominous cloud!

For heaven’s sake, calm down, I admonished myself. Here I am running like my life depended on it. It’s just a siren. People in Israel and other war-torn countries have to hear these sirens (if they are lucky enough to have them, that is) along with the sounds of guns, heavy artillery and even death.  This world is a crazy, dangerous place!  As I make my way through the parking lot I am now thinking about how  people—especially the children–in war zones deal with the sirens and I am immensely sad.

Be grateful Missy, I say to myself. It’s just a mundane weather issue…not war, famine, Ebola or a beheading. And, while tornadoes aren’t to be taken lightly either, just be calm!

As I ran to the car, fierce lightning lit up the sky all around me and rain was coming down fast and furious.  Oddly enough (or perhaps not) I did not feel one bit safer once in the car.  I found myself white-knuckling it all the way home, naturally driving slower than usual because of the pounding rain and the traffic, thankfully moving at the appropriate pace for the road conditions. I cringed with each bright rip of lightning through the sky and gripped the steering wheel even tighter when I saw one very brave soul, a man who looked to be in his thirties, in the middle of the road trying to move a very large tree branch that had fallen onto the roadway.

After just a few minutes in the car I realized that part of my anxiety was due to what was playing on satellite radio. I was tuned to Fox News channel and there was ongoing coverage of the Ebola epidemic followed by the continuing threat of ISIS. This was NOT what I wanted to hear as tornado sirens were blaring while I was driving through a terrific downpour. I changed the channel to the classical music station. Ah….Mozart to the rescue! In the blink of an eye I felt calmer and was able to loosen my old lady grip on the steering wheel.

Let’s just focus on arriving home in one piece, shall we?

Once home, I encountered lots of debris in the yard as well as a large tree branch that had fallen onto the drive way. No way was I going to attempt dragging that thing out-of-the-way in the pouring rain and lightning. Fortunately, I was able to navigate around it just enough to pull my car in the garage. I let out a sigh of relief to be home. I know. This sounds overly dramatic–and it is— but for some reason on this day I felt as vulnerable as a baby in the hands of capricious mother nature.

It was only 4:30 in the afternoon but I thought a glass of wine was in order….to soothe The Poodle, you understand. My poor pup was shaking as he greeted me at the door with a stilted enthusiasm. I could tell he was trying to be brave while he greeted me but more than anything he just wanted to be under something…anything…with all the racket that was going on outside. After I got my glass of wine, I gathered The Poodle into my arms and carried him to my bed. I wrapped him in my quilt and together, we hunkered down for a good hour while the wind howled outside and the rains continued. I had my dog nestled at my side, a good glass of wine and Ayn Rand’s magnum opus, Atlas Shrugged, to read.

Everything was going to be just fine.  For me anyway.  Sadly, not for those living through the sirens signalling war.