I’d like to think I am fairly hip with the times.    I read.  I ask questions.  I am decently proficient with social media and, though a little less so, with ever-changing technology. My mamma, for example (in my humble opinion) has been an old school thinker since the day she was born. There is some virtue in that, no mistaking. And me? I don’t consider myself old school though I’m certain my kids may think differently because…well…they know EVERYTHING. That’s not to say I easily bend in the direction of the wind with respect to topics big and small. I do think about things, weighing popular opinion, facts, and what I feel deep in my gut.  I make a decision….form an opinion…and even change opinions when I feel compelled deep inside to do so.   I believe that is a healthy and necessary part of growing…evolving through this life. 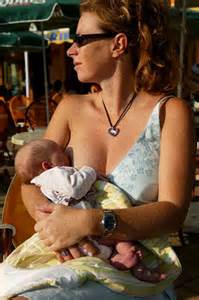 So, I’m in the Target store the other day on a mission to pick up a few grocery items as well as peruse the aisles for Christmas gift ideas. Just as I am passing the pet food section where I had picked up treats for The Poodle I see a sight that made me look twice…well maybe thrice. A woman walking down the main aisle, pushing a shopping cart. Nothing strange about that… quite obvious. But, what made me look more than once was the fact that she was breastfeeding her baby as she pushed the cart. Again, not so strange although I’d think it would have been more comfortable to be sitting in a quiet place, say at the Starbucks just inside the Target entrance. What’s the “problem” then you ask? Well, her shirt was unbuttoned to the navel, pulled off completely from one shoulder and her entire sagging and extremely ample breast was out for all to see. Yes. Hmm….. Don’t get me wrong. I’m all for breastfeeding. I breastfed my two babies although not for as long as I would have liked due to something called intense pain (Let’s just say my babies got a good nutritious start but it ended well before six months was up with each).    Breastfeeding is a natural biologic function and there is no question that mother’s milk provides superior nutrition to babies. And, I’m not opposed to breastfeeding in public either. Really!   When baby is hungry, baby needs fed, simple as that. But I do feel that there is a time and place for letting things all hang out. I suppose I’ll be labeled Victorian or overly uptight about nudity. I honestly don’t feel I have a Victorian view of the body; I am not ashamed of breasts (or butts) ….they can be quite beautiful (emphasis on the word can!). A scene comes to mind from about thirty years ago while on a beach in Italy. My son, then two years old had toddled away from our beach blanket towards a young woman sunbathing. As I run to rein him in I note that the woman is topless. This was my first encounter with topless sunbathing. I was struck with how beautiful the woman was (she had to be in her early twenties) and indeed, her breasts were absolutely perfect. I’d be lying if I didn’t admit to a tug of envy.  But during the same morning on the beach I’d see older (and old) women in all shapes and sizes strutting their “gals” topless. Lord have mercy….some of them… not such a pretty sight. I realize I’m setting myself up for rebuke;  Beauty is in the eye of the beholder, I know.  Still, at a certain point, in the words of Kenny Rogers, ya gotta know when to fold them….if you get my drift. While public breastfeeding is normal and acceptable in many cultures throughout the globe there are places in which it is forbidden. Not surprisingly, you cannot get away with public breastfeeding in Saudi Arabia where it is forbidden to show any part of your body in public except for face and hands. But in many other places there is everything in between when it comes to the subject. In China, public breastfeeding raises many eyebrows but it is also accepted by many. In other countries–Iceland, Germany, and France for example–it is widespread and uncontroversial. And in the U.S. laws regarding breastfeeding vary from state to state but all 50 states have passed some kind of legislation that either allows women to publicly breastfeed or exempts them from being hauled off to jail charged with public indecency. I suppose I’m going to draw criticism (but remember folks, it’s just my opinion)….as much as I am all for public breastfeeding I do feel that a modicum of modesty is in order…and honestly it really doesn’t take much!  The mother could have performed this natural and necessary duty in a more discreet manner by simply covering-up, even a little. If she didn’t have an extra blanket, coat or something to provide cover she could have taken a few minutes to sit at Starbucks and discreetly feed baby. So, I’m wandering if it is just me?  Am I becoming one of those old-school, teetering-on-senior-hood thinkers or what?  And…perhaps more worrisome….does it have anything to do with living in Middle-Earth? I suppose it doesn’t really matter. After all, there are infinitely more important, truly news-worthy and gut-wrenching events happening in the world. A woman’s bare breast in a Target store ranks pretty low in the scheme of things. But this is bible belt Alabama folks. And while I’m certainly not one of those bible-toting-fear-the-wrath-of-God kind, I did find the bare breast incident surprising. Appropriateness is a matter of opinion that’s for sure!  Just like my reaction to a decorative wood sign I saw at a craft fair a couple of weeks ago. It read: “I love you with all my butt. I would say heart, but my butt is bigger.”

Seriously?  Not funny! No doubt about it folks; At 57, I’m losing my “hip” factor way of thinking.

2 thoughts on “Losing my Hip Factor”