It landed on deaf ears. Fluffy, lovely coiffed black ears that is. 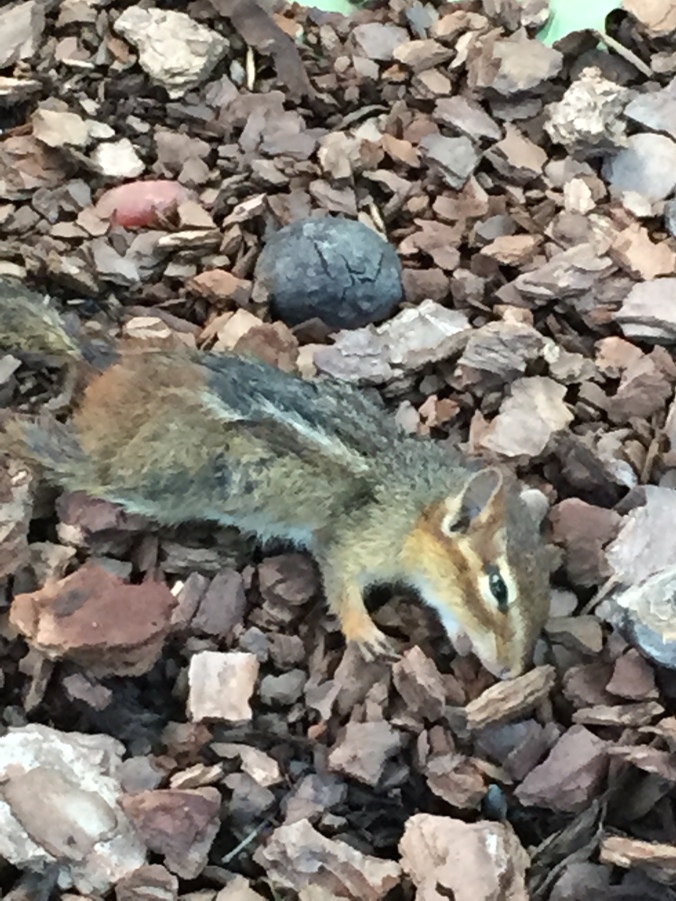 The Poodle’s one, and hopefully only, kill

So, for reasons unknown to me we have a proliferation of chipmunks this year. They are everywhere. Popping up from underneath rocks, skittering about to and fro between the fence and trees and on the roof too. Up, down and around and even into my flower pots they go.  Okay…so they are cute, but they are mighty annoying particularly when they cause a certain someone to bark like a maniac.  Yes. That would be The Poodle.

The Poodle’s favorite thing to do is to sit at attention at the back patio door. There, he looks out over the back yard in rapt attention, eyes spanning the yard in hopes of seeing something, anything interesting. I get it.  Really I do.  His life is a bit more boring here than his Southern California days when he was able to be out and about with me every day.  So, staring at the back door is his television and most days the programming is the same. The “nature channel” features lots of squirrels, lizards darting about, birds bathing in the bird bath (now chipmunks too), and even deer walking the back fence line in search of food. We’ve also got a red fox that wanders in. She’s the proud mother of five babies, nestled in their den which is located in a mound of rocks at the next house over. A large groundhog often sits on the rock line behind the fence as well; he’s surveying the land, as it were, while armadillos (the scourge of the neighborhood) often wreak havoc digging large holes during the night. Often the nature channel’s programming is preempted by a torrential downpour or thunder and lightning and the wild sway of trees in high winds. This is when The Poodle retires to a dark corner, curling up into a tight ball, shaking with fear if the thunder is particularly loud and sharp.  I’ll wrap him in a towel or grab his Thunder Shirt, if the thunder hangs around for a while, in the hopes that this will alleviate some of his fear.  We all wait for the weather to blow over and when it all clears, The Poodle is back at the door watching his favorite channel.

When a squirrel wanders into The Poodle’s view, literally taunting and teasing him by ever so slowly sauntering up and down a tree or scurrying back and forth across the patio, Poodle goes absolutely bonkers (this, by the way seems to happen with annoying frequency when I’m trying to carry on a phone conversation!).  The Poodle barks and whines at the door and then runs around in frenzied circles. He does the same when chipmunks frolic in the mulch beds just off the patio.

And, I often do. Squirrels and chipmunks are fast little critters as you well know. And while The Poodle shoots out the door every time like some super sonic missile he’s simply not fast enough to beat them.

Or so I thought.

So yesterday I’m sitting on the back patio, a glass of wine in hand, reflecting on the events of the past month with Rocket-man. It’s been another very painful month on the mama-drama front. Let’s just say that the words betrayal and lies best fits what has occurred over the past month. I’ve just returned from a lovely weekend visiting my best friends of thirty years. It was a chance to get out of my head for a couple of days and see a couple that has seen me through my darkest moments…and, in the process, they have never turned their backs on this often conflicted but ever-evolving soul. They’re my family and I am one very lucky woman!

As I sip wine and tell Rocket-man about my weekend away, The Poodle is relaxing by my feet, happy to have me home. Just as I was delving into my story about eating a delicious chicken and vegetable crepe at the farmers market in downtown San Antonio, The Poodle is up in a flash, making a mad dash across the patio and into the yard.

It takes us a nano second to see what is happening. “NO, NO, NO, NO!” I yelled. Rocket-man was yelling too.

We were too late.

The Poodle has killed a chipmunk!

I’m horrified and sick to my stomach.

We rush to the site in hopes that the chipmunk is just momentarily stunned. “Maybe he’s playing dead? I say hopefully in between yelling “Leave It” at my dog. The Poodle is bent on finishing the task and is not heeding to our “LEAVE IT” command. I grab a hold of The Poodle’s collar and lead him away in one quick yank while Rocket-man checks on the fate of the chipmunk.

“Yep. It’s dead,” confirms Rocket-man. “I’ll grab the shovel and dispose of it,” he adds.

I lead The Poodle into the house, admonishing him all the way. Would he have eaten the poor dead thing?  I wonder as I walk up the patio steps.  I shudder at the thought. Well…you’re not sleeping in my bed tonight mister.

I make The Poodle stay inside while we return to our patio chairs. Rocket-man says I need more wine after witnessing this traumatic event so he brings me another pour. The Poodle looks out the window at us, still panting in excitement.  He’s trying to get our attention with an expression that seems to convey, ”Aw, come on mom. Let me out. I promise to be good.”

“Well, he is a hunting-retriever dog,” says Rocket-man trying to get me to brush the ordeal off.  “He’s simply doing what dogs do.”  So, Rocket-man, in an attempt to bring levity into the situation, has now started calling The Poodle “Killer.”

Naturally, I am not one bit amused.

2 thoughts on “Killer in the House!”