One of the cool things about visiting my sis in Northern Virginia is that days are filled with laughter, a measure of silliness, good food, and every so often, interesting challenges (Oh…and wine. One cannot forgot the wine).

Along that vein, we found ourselves at IKEA yesterday.  Not by accident, of course.  Sis wanted to check out a bar table that she had been thinking about.  She had asked if I wanted to tag along.  Silly question sis!  Wild horses couldn’t keep me away.

My first IKEA experience was in Germany.  Followed by more shopping adventures and many plates of swedish meatballs in Northern Virginia and California (and for the record, the horsemeat controversy seems to have cleared up though I will confess that I’d much rather be in the “ignorance is bliss” camp when it comes to those meatballs).  So….middle- earth? No IKEA. No ‘a lot of things’ but to be fair, Whole Foods is coming to town by the end of this year.  That really is fabulous folks…although, just as I am gearing for a move.  Go figure!

Anyhow, I’m happy to tag along and help sis with her decorating project.  As we’re driving towards shopping heaven sis explains what she is looking for adding in jest; “Hubby will kill me if I get this table.  He’ll say we already have a decent table to use for entertainment overflow.  But this one is just perfect for the bar area…and, it’s on sale… and it’s the last one left. In fact, I hope it is still there!”

We park the car and make haste to grab an IKEA cart.  It’s still early so thankfully the store is not crowded.  In a blink of an eye we are standing in from of the ‘last one left‘ table.  It’s a bar-height table with four stools.  And sis is right.  The price makes it great deal.

“What do you think sis?  Won’t it be perfect for the downstairs area.  And, it’s sturdy enough to take plenty of kid-abuse.”  For those who are scratching their heads over this, rest assured that kids would be in the bar area solely because all the toy paraphenalia is essentially in the same room.  So, rest assured…the only beverage kids will be imbibing in at the bar table is milk.  And of course,  there will be plenty of pizza nights and scarfing down of other such gastronomical delights.

I look the bar table over and take it all in then nod in agreement.  As I do so, I note that another couple is eyeing the table. “Let’s be quick about getting it,” I say in a whisper.  “It looks like others are just as interested in your table”.

Alas, we did not make it to the meatballs.  Sometimes one must sacrifice for the greater good.

As we’re driving home and making plans for the next day, sis says she’ll be busy assembling the table and  bar stools.

“Aren’t you going to let your hubby tackle that,” I ask fully confident that my question wasn’t in the least   bit ridiculous.  I’ve purchased IKEA furniture on a number of occassions through the years.  Assembling IKEA furniture is a true test of courage, physical endurance and, more importantly relationships.  A buried memory from eighteen-plus years ago springs to mind, along with vivid images as if it were just yesterday:  After I had gotten divorced I purchased an IKEA desk for my daughter’s room.  I got the large, heavy box home feeling positively triumphant.  It was my Helen Reddy “Hear Me Roar” moment.  I had managed to get the huge box out of the car and up a flight of 14 stairs on my own.  However, once I opened the box only to find nine hundred pieces and a set of minimalist instructions —that would be instructions containing stick figures sans text–all good intentions and any ‘hear me roar’ bravado I had mustered that day went out the window.  I mean really folks; instructions with NO WORDS.  Not one single word. Who does that? 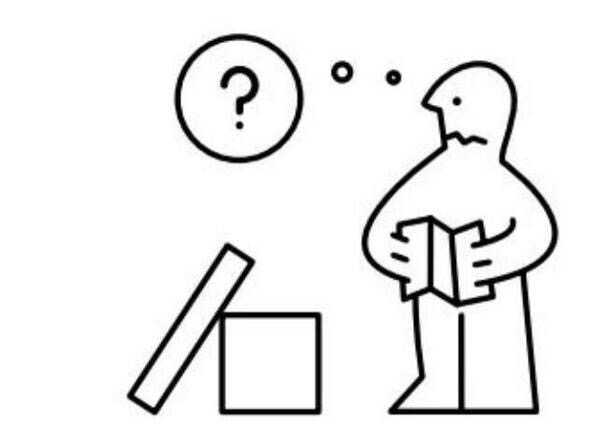 I sat on the floor and cried for an hour.

In my defense, it was a highly stressful and emotional time in my life.  Thankfully, my forever friend Mabe came to my rescue, arriving with a bottle wine in hand. With tears dried, along with you-will-get-through-this–hugs, we set to the task of assembling the desk.  I’m fairly certain that a bottle of wine is the only way to get through assembling IKEA furniture.  It should be included in the assembly instructions, as in: STEP ONE….pour a glass of wine.  Mabe was masterful at digesting the instructions.  To this day I’m ever grateful for Mabe’s help that night.  I’m certain that desk would still be in it’s box–with me in it–if she hadn’t come to the rescue.

So, in true I CAN DO THIS FASHION …one that my sis seems to have mastered just a tad better than me (in certain situations at least), sis rolled up her sleeves the very next morning after seeing her son off to school.  It was 9 a.m. when sis and I descended into the basement to tackle the project.  Honestly folks, I was very excited to help; I wasn’t about to let sis have all the fun.

Together we opened the first of five large boxes.  Carefully we laid out the wood pieces for a bar stool on an area rug.  Then we opened separate plastic bags, each containing a variety of sizes of screws, fasteners, brackets, pegs, nuts and bolts, a ridiculously teeny-tiny allen key and one larger wrench.    There were about 90 pieces of hardware in all.  That’s for one bar stool.   It was up to us to locate the proper tools for the job, including a mallet hammer, a wood punch, a phillips head screw driver, and several other screwdrivers (just in case).  I laid out all the pieces, carefully counting and organizing them while sis went to locate the necessary tools for the job.  IKEA does not provide extras of anything so I was obsessed with counting and putting all the hardward into neat little piles.  Rocket-man would have been proud of this.

I must say I was mightyly impessed with my sis.  She had the instructions figured out in nearly two blinks of an eye.  Moi?  I was transfixed by the number of arrows, dotted lines, part numbers, etc. I’m fairly certain I had a deer-in-the-headlights look.

“Are you sure about this?” I asked sis.  “Our husbands could knock out this project while watching football.  In fact, they could probably do it during half-time while simutaneously eating a burger with all the fixings. “This just looks so…um…daunting.”

“No problem, ” says sis.  “We can do this.  I put together that IKEA kids play kitchen a couple of years ago when hubby was deployed.”  Wow. Yet another reason that Sis is my hero.

And so, between the two of us, we began the project. 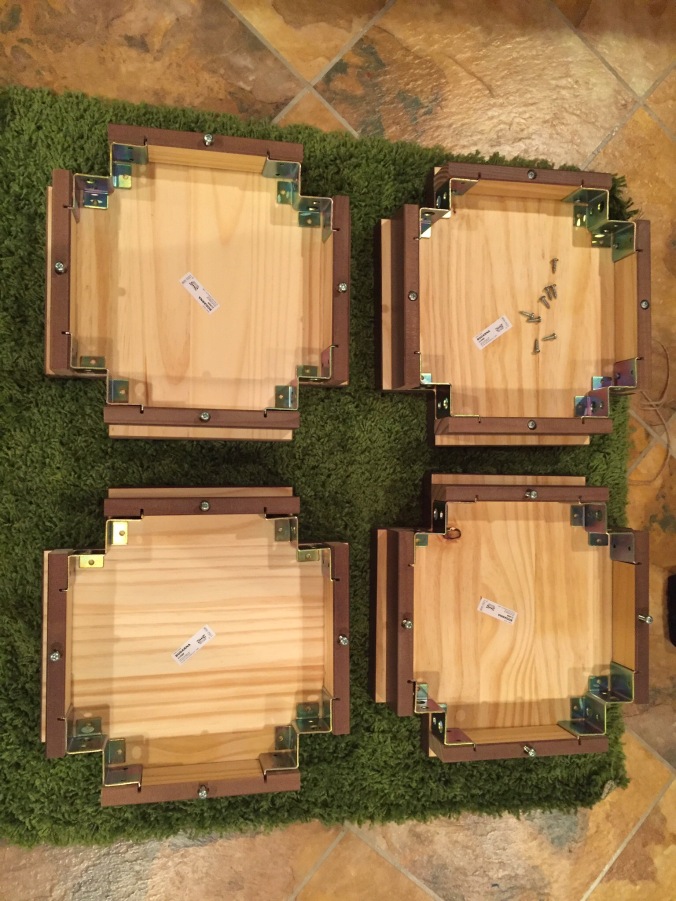 My stiff hands began aching quickly so I asked sis if she had an electric screwdriver. “Things might go a bit faster.”   She had to make a quick shopping trip out to get one.  While she was away, I opened the remaining four boxes and laid out all the parts, counting and organizing as I went along.   The room looked like a disaster zone. I tried to keep things tidy but it was difficult with all the cardboard packaging pieces.  I stacked them high into one corner hoping that I wasn’t creating an avalanche situation in the process.

By the time sis arrived with our new power tool I had assembled three of the four bar stools up to STEP Five of the instructions.

“Just in time,” I say happily to sis. “We’re ready for the power screwdriver.””

Sis and I took turns with the power screwdriver.  What fun that was!   Whir, whir, whir was the sound in the room for hours as we worked.  We did some huffing and puffing….broke a nail…scraped knuckles and even knees (don’t ask).  At one point, Sis blew a whisp of her blonde locks away from her eyes as she dealt with a particually difficult screw.  “You know,” she said….”This power tool makes me feel like I’m gonna need a beer.”

With that, we both rolled in laughter.

So, now the basement has a bar table and four stools.  I don’t know about my sis, but I felt mighty proud to have been part of the process.

“You’re not going to want to get rid of this table for a long time…if ever,” I said to sis as we stood back admiring our efforts.  “We gave each other a hug allowing the moment to sink in. “Yep, we certainly put blood, sweat and tears into this,” she acknowledged.

Later when recounting our day to Rocket-man I remembered a TED Talk podcast I had listened to some months back about work and satisfaction.  One comment from that episode comes to mind and it was specifically about IKEA furniture.  It seems that folks who toil over putting their IKEA furtniture together –as opposed to having someone else do it–feel a heightened vested interest in their work and the fruits of their labor (I’d also add a strong degree of pride and tremendous sense of accomplishment!).   Just saying.

2 thoughts on “Sisters…Hear us Roar!”