Greetings from limbo-land.  We’re officially at the 20-month mark and there doesn’t seem to be a light at the end of this tunnel.  While we are immensely grateful for these temporary digs my frustration (read: that’s an understatement) is reaching an all time high.  I’d say a short calming mantra to ease this frustration while fingering my simple fossil coral Mala-bead bracelet–the one I chose before our temporary sojourn began.  It’s “Air element” properties symbolized movement and change (if you believe that sort of thing).  The concept was appealing in the moment when I saw it.  So, with the click of the mouse, it was mine and it made me smile. 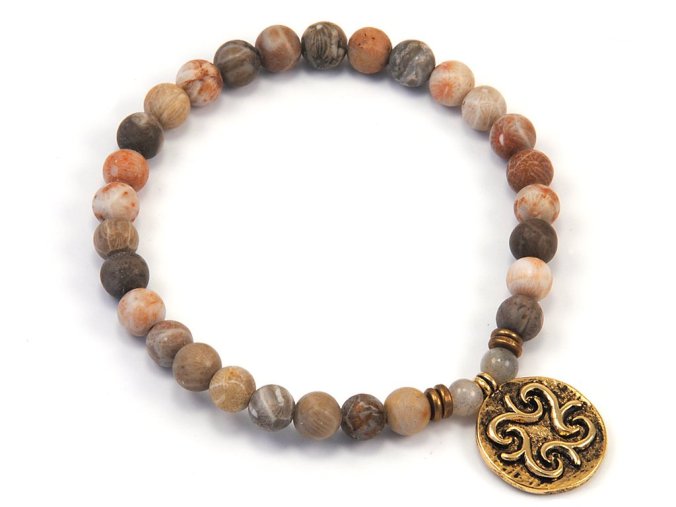 Alas my bracelet was inadvertently ripped to smithereens by one very grumpy old cat this morning.

Is the universe trying to tell me I didn’t need one more bracelet?

So, while signing for a package, trying to keep two very enthusiastic dogs from knocking over the UPS dude, said cat scooted with amazing speed past the feverishly excited dancing dogs, right between my legs, darting out into the yard, into the bright sunlight.  He’s old, in poor health and not an outdoor cat.   My heart rate shot off the charts as I flew over a brick landscape wall to catch the cat before he was able to make a complete get-away.  I  managed to come up behind him as he had stopped for a moment to chew on a blade of grass.

Whew, gotcha!  I scooped his thin frame up into my arms and, well… let’s just say he was not going down without a fight.

“I completely get it,” I say to the cat as I make a dash back into the house.  “I’d want to enjoy what time I have left too…out in this beautifully lush yard with this lovely summer breeze tickling all of my senses. But you are not going to get lost-in-the-wild on my watch you silly cat.  Besides, more importantly, you are NOT an outdoor cat!

I was nearly on the front porch when the cat made one last valiant squirming effort at escaping from my arms.  Ouch!  I felt the scratch to my left wrist and heard the clink of metal to the ground.  I didn’t stop to investigate as my only focus was to get the cat back into the house before he could extricate himself from my grip.

Once inside, after a moment or two to catch my breath, I gave the cat a piece of my mind.  The dogs were sitting, still as statues, seemingly enjoying the moment.

HA, HA, HA….you’re the one in trouble now.  She’s not lecturing us!

I went into the powder room to wash the cat scratch area and that was when I noticed my bracelet was gone.  Son of a biscuit.  That was the metal sound.

Sure enough, I found the small air element charm, alone on the pavement but all the beads had scattered helplessly, disappearing into the lush abyss of grass and chip beds.

The package I signed for was a wine shipment.  I think I’ll open it.  It’s five-O’clock somewhere….right?