Alas, not the written kind folks.   I’ve haven’t gotten too many of those in my nearly sixty-two years.  Lamentable….I know….right?! Not to worry though as I certainly haven’t let it define my life.  In fact, the few I have received (which I could name on one hand with digits left over) were special enough to make up for any perceived scarcity in the love note department.

What I am referring to on this day though are musical notes of love.  I’ve been listening to evocative romantic tunes since before my feet hit the floor this morning.   An eclectic mix of tunes from classical music (Chopin, Debussy and Bizet just to name a few) to Chris Botti and his trumpet, Keith Urban (oh where did that come from?!) and then various cedar flute selections filled the house.  Later, it would be Hearts of Space music with  David Darling’s cello that would accompany me into the woods on my morning walk and afterwards Tibetan Bells helped me to zone out for a few minutes.  In effect, my heart has been all over the place on this day after Valentines Day…from happy to heavy and all the notes in-between.

I’ll attempt to explain but honestly, the right words elude me….

My turning (and tuning) in-ward began yesterday actually, on Valentines Day.  It started early with a doorbell ring, which naturally made The Poodle bark like crazy.  He could see who was at the door and was positively busting with Poodle joy.  I had just stepped out of the shower and was, admittedly, annoyed by all the ruckus.   When The Poodle barks it often rattles my gray matter and tests mightily my patience.  I quickly donned a robe and off I went to see what had my pooch in such a tizzy.

Through the window, I could see a car pulling out of my driveway. The Poodle’s snout was squashed against the window as he whined and barked in happy excitement.

My nephew, on this way to school, had left something on my front doorstep.

I opened the door to find a perfect pink rose surrounded by lovely baby’s breath.

Swoon. My first love note of the day!

My heart swelled and feelings of love kept my steps light as a feather as I breezed through morning chores humming to Coldplay and, again…. Keith Urban.  There was a brief text consisting of a string of love emojis from my husband, who was away on business travel, and even a Happy Valentines text–the first in sixteen years– from my son who continues to be mired in difficulties that make my heart break.

And then a whisper…through cyberspace…broke the spell of love notes….

I was not surprised by the email from my beloved auntie Linda;  sis and I knew it would be coming.  Linda’s husband–my favorite uncle, Uncle Budd, was expected to take his last breath imminently.  He had been under hospice care for some time.  As I read her words I became aware that I was holding my breath….

I closed my eyes and let out a long and slow exhale.  So, I decided to sit for a spell with The Poodle curled in my lap, abandoning what I had planned for the rest of the day.

I simply wanted space to remember….

In crystal clarity I can see the twinkle in his piercing blue eyes…and, I feel his loving hugs–surprisingly strong for a man of his advanced years–hugs that he gave me when I saw him last, in 2014, on the occasion of his 90th birthday.   This man, a loving and devoted husband and father, served in WWII, Korea and Vietnam.  He was the epitome of The Greatest Generation.    A soulful cello piece plays in the background  as I think about that visit with my uncle.  A single tear rolls down my cheek….followed by another….and another….

And there it was…regret bubbled to the surface.

I had too few moments with my uncle because  I had allowed–consciously and unconsciously–the baggage of a wrecked childhood to define me for too long….and then later, as if awakened from a slumber of a hundred years, life and geographic distance got in the way of regular visits.  I wipe the tears with the sleeve of my shirt and caress The Poodle.  “We’re all going to go,” I whisper…”there is no time to waste.”

How blessed I feel to have lovely things to think about…memories forever cherished with Uncle Budd.  There were a string of brief visits we shared in Carefree, Arizona when I’d be visiting my mother and he’d pilot his plane in to a private airport literally around the corner from where my mother lived.  I cherished those visits with my Aunt and Uncle.  We’d imbibe on good wine and catch up on life including their stories of travel and adventures but more importantly, I treasured the loving shoulders to cry on (and cry on them I did).  I hungered for their unconditional love and understanding along with Uncle Budd’s bear hugs that sent rays of brilliant sunshine straight to the ever-present hole in my heart.    And, I’ll never forget that long June weekend some fifteen years ago to the last frontier….Alaska –the place where my aunt and uncle called home for many years.  Rocket-man and I had decided to run  the Anchorage marathon.  I didn’t even need to finish the sentence when I had called to ask if we could come to “hang out” while we ran a marathon.  My aunt and uncle made me feel like a rock star that weekend…

Before us great Death stands
Our fate held close within his quiet hands.
When with proud joy we lift Life’s red wine
To drink deep of the mystic shining cup
And ecstasy through all our being leaps—
Death bows his head and weeps. 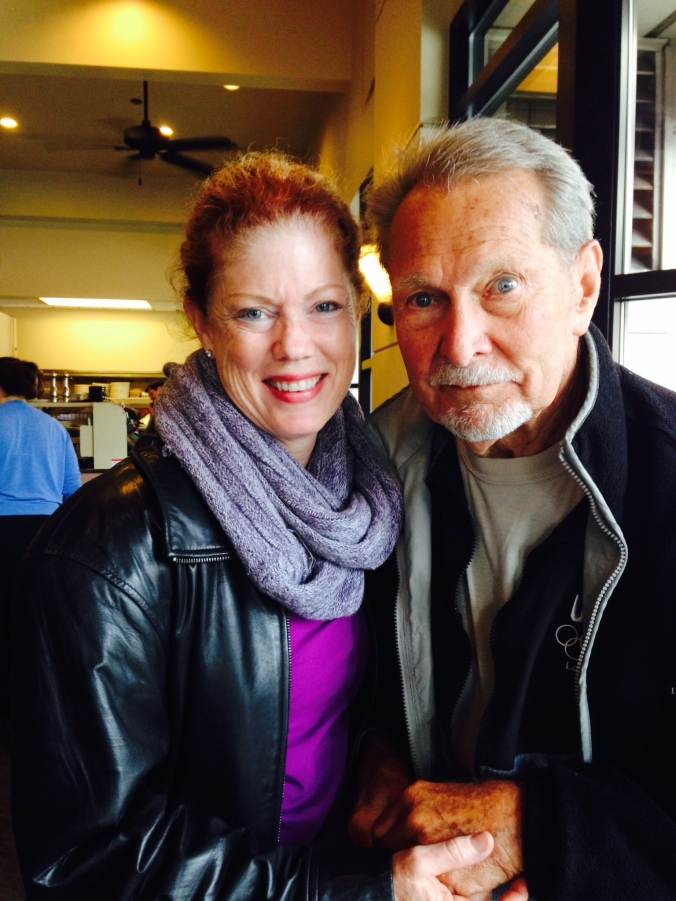 Uncle Budd and I on his 90th Birthday in Seattle Washington

This gentle giant, in my eyes, has now passed.  His beautiful soul now makes the journey upwards –into the blue skies where his physical body once flew.  Though death had a duty to take him he lives on, I believe, through all the souls he touched during his 94 years on this earth.

There is, through salty tears aplenty,  a certain comfort in that.

I love you Uncle Budd.  Rest assured we will all take good care of your loved ones here as best we can until it is their time to take the journey to be at your side.