It was just a moment. One of those blink-of-an-eye kind of moments.  OK…more like  two blinks…

I saw a Facebook post this morning from a dear friend who I haven’t seen in some years.  She’d participated in a 5K race and won in her age group.  She’s six or seven years older than me.  She said how blessed she felt to be able to run again.

That green-eyed monster that lays dormant most of the time within me stirred…just a wee bit! 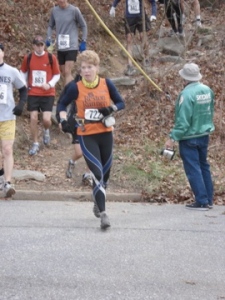 I could almost feel green goop seeping through every pore in my body.  It lasted only a moment folks.  I’m OK…well, sort-of.

I commented something to the effect “Way to go” and truly, I am happy for her.   She’s had her share of issues over the years to include a serious chronic illness that has dogged her for the better part of thirty years.  After she was diagnosed, she had a “pity party” (as she put it) that lasted a couple of weeks.  She then kicked herself in the tush and never looked back.  She kept running and despite health issues that sometimes derailed her, she is still at it after all of these years.   While I am  thrilled for her the reality for me cuts deep. Structurally, I am done; I cannot keep running into my golden years as I had planned on doing.  So yes….the green-eyed monster rears its ugly head now and then despite my best efforts to keep it knocked out into another universe.

Anyhow, a quick summary about my running mentor-hero who just kicked ass in her over 60-age group….

I’ve called Sue my “wind beneath my wings-hero” for many years.  She was instrumental in giving a wounded soul wings to fly.  And, Yes…her title is ripped right out of that Bette Midler song; it arose somewhere along mile nineteen during a marathon we ran together in 1990.  We crossed the finish line together in freezing temperatures, holding hands..and waving our little American flags to honor the service men and women (including her husband) who were serving in Desert Storm.

We were army wives when we met; me a young major’s wife…she a seasoned Lieutenant Colonel’s wife.  I had just arrived in Chambersburg, Pennsylvania–fresh out of a three-year posting in Stuttgart, Germany.  After settling the house in speedy good military wife fashion I was quickly falling into that all too familiar hole of darkness.   One day, just weeks after my son started kindergarten, I’d decided that I’d had enough of sitting at home on my butt wallowing in loneliness.  I drove the six miles to the army depot where my then-husband was assigned, with my 18-month old daughter in tow.  I was going to shake up my day and put my baby girl in the child care center for an hour so that I could go for a run.  I was still quite the running novice then, having started in earnest in Germany but only months before I found out I was pregnant with my daughter.  It was time to get back into the swing of things and start the whole running thing over again.  I’d never put my son in a child care center and I remember feeling extremely guilty for dropping my daughter there on that very first occasion.  Of course, she cried; she was going through a separation anxiety period.  Fortunately, for the both of us, this period was exceedingly brief.  Honestly, at the time I didn’t feel like I had a choice; something dark was bubbling to the surface of my being and I had to do something.  There’s a story behind it all but it’s not important now.  It took some years and reflection to be able to say with absolute certainty that the decision I made that day saved my life.

So the ritual started.  Two to three times a week after my son was off to school I’d drop my daughter off at the child care center around 9:30 a.m. and go for a run.  The child care center was located down in a little valley of sorts on the depot.  My course was a short one, only about two miles, but it was very hilly.  I’d huff and puff up the hill and once at the top I’d have to stop and walk a bit to catch my breath.  I’d continue on for a mile more before turning around and then literally flew back down the long hill.

For the most part I was the only one out on the roads at this hour. That is, until one day I noted another person running.  She was petite –all of size 4, I’d guess– with a white baseball cap, a blonde pony tail peeking out from under her cap.  I’d see her in the distance, running down the hill and then she’d disappear off the main road.  I’d wonder where she went but didn’t think of following her. She was clipping along at a good pace; she looked like a serious runner.  I still wasn’t very confident about my running abilities, nor my  navigational skills (I didn’t want to get lost on post) plus I was worried about getting back to my baby girl in a timely manner.

Some weeks later there was a military wives social of some sort.  Minutes after arriving I recognize the blonde runner (as I referred to her); she’s talking to a group of women near the food table.  I can remember being self-conscious in a flash.  She’s so pretty I thought. Her blonde hair was pulled back into an elegant french braid and she was dressed to the nines.  I suddenly felt like a German frump.  I may as well have been wearing ugly brown “sensible” shoes with white bobby socks, and a burlap bag for a dress. I felt completely out-of-place and (not uncommon) thoroughly alone.  I thought about leaving… after I soothed my soul with a piece of cherry pie and a cup of coffee.

The blonde runner was making her way to me….

Oh no!  Shyness (or was it fear?) enveloped me.

“Well….um…I’m not really sure you could call that running.  I haven’t been at it for very long and, well, I am new to the area….I’m just trying to keep my head on straight since I’ve got two small children.”

In an instant everything changed.

Was she really saying “let’s meet for a run.”?

So, I started running with Sue (or “Miss Sue” as my kids used to call her).  Miss Sue and I would meet several times a week and before I knew it I was running a three-mile distance with ease.  Sue even got me to sign up for a local race and that’s when the running bug really bit me.  I didn’t stop running….for more than twenty-five years.  It was Sue that gave me the confidence to sign up for my first marathon in 1989.  After we had run a ten-mile race (the Army 10-miler, if I recall correctly)  she said I was ready for a marathon.  “Um….26 Miles….are you nuts?”  “It’s 26.2 miles,” she said.  Oh…that’s just insane!

But the seed was planted….

Before I knew it Sue and I were training together (she even got me into weight training).  Three to four times a week we ran six to eight miles together and then on Saturdays we added on to that with long runs that took us around the depot’s beautiful little lake…through neighborhoods and out along a stretch of highway towards Shippensburg, working our way up to an eighteen mile distance.  We talked about everything and nothing during all those runs.  We talked about our kids, our husbands….our hopes and our fears…our dreams…our failures and our successes….We talked about food…lots of food talk!  We laughed and we cried (well….I cried. Sue does not have tears due to Sjogren’s).  We talked about politics and events both local and overseas.  We were thoroughly convinced that our country would be better off with women like us running things in Washington D.C.

I should also mention that I also started working for “Miss Sue” during those years in Chambersburg.  An avid health and fitness enthusiast Sue had submitted a proposal to run and manage an Army fitness program on the depot.  She crafted the “Fit-To-Lead” fitness program and before I knew it I was getting certified as an aerobics instructor and teaching classes at the depot’s gym facility.  Let me tell you; This was about as far out of my box as I had ever been.  I’d never in a million years would have ventured into the health and fitness industry if it hadn’t have been for Sue.  I’m forever grateful for her support, guidance, and belief in me…especially when I didn’t have that belief for myself.  Looking back, I think it was because of Sue that years later I pursued a graduate degree in health promotion management.  She planted the seed, believing I could fly… and then my husband helped make sure that the seed took root and flowered; he was there to make sure my fear of failure would not make me quit.

Despite trying to navigate through some very dark and challenging bumps in the road of my personal life… including some big mistakes along the way, the three years that I ran with Sue were some of the best years of my life; our runs together saved me, pure and simple.  My children may never know…or maybe even care…how those runs saved me but they should know that I was a better mother for it, despite what they may think.  I could have gone the route that so many do with drugs or drink, or both…but running lifted my soul to a new level (not to mention that I looked like a million bucks back then…sigh). That…and the love and friendship of a wonderful friend…the wind-beneath-my-wings-hero…Miss Sue.

So, with twenty-nine marathons and five ultra-marathon distances behind me…I cannot run now….but each passing day the reality of that “sentence” is becoming a bit less painful to my psyche.   After all,  I’ve got some impressive accomplishments under my belt as well as many wonderful memories….

Thank you Miss Sue, from the bottom of my heart.